Setting sun gilds the icicles hanging outside the bathroom window. These are relatively small.

The mantra of the naturalist is “Pursue direct experience outside every day.” I have been struggling to keep faith with the mantra, in the coldest February on record in Ithaca, New York. The temperature at 7 am a few days ago was -20 degrees F without a wind chill factored in. Houses all over town look like jails as enormous, life-threatening icicles hang from gutters. It’s a little grim, from the inside looking out.

However, throughout the prolonged deep cold a tufted titmouse has been singing at dawn every morning in the apple tree outside my bedroom window. This particular individual’s whistle-like call is an insistent reminder: Go out, go out, go out. Breathe the bracing air, rejoice, and shiver to acclimate and become one with the outside. 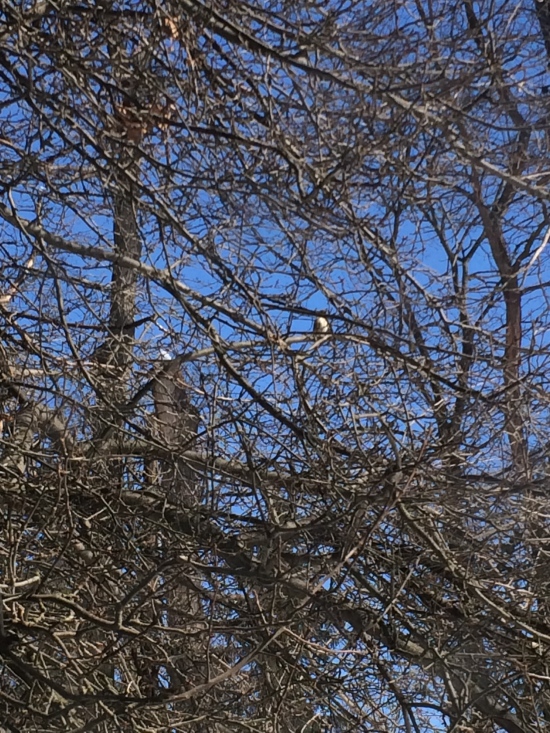 Tufted titmouse, slighting to the right and up from center, in the branches of the apple tree. Only the buff belly is visible.

However, sometimes it is easier to be pulled out than to go out. My husband and I took leave of the bitter cold here in Ithaca and made a dash south to Vinegar Hollow in Mustoe, Virginia, to be with family at our homeplace. We were not expecting it to be much warmer because the Allegheny Mountains of western Virginia usually report very similar temperatures to those of upstate New York.

The end of Vinegar Hollow, cold but calm.

It was bitter. A brief warming trend lightened our spirits, melting much of the snow, but then a blizzard roared up from the south, filling the hollow with whirling, horizantal streams of snow. One by one the locusts, maples, and cucumber trees on top of Stark’s Ridge became ghostly, as did the hills and meadows and fence posts. In the yard the big yew and the big boxwood fluffed out like giant white owls. The cottage seemed to spin inside the whirl winding snowflakes.

The colors of winter: white on gray.

My husband loves inclement weather. He was out there somewhere in the forest chopping wood. When poor visibility made chain sawing a hazard, I presume, he came to the sliding glass door. “Come out for a walk!” he said. “You don’t want to miss this!” I looked at the fire. I looked outside. “A walk?” The double sliding glass doors gave a full view of the white out conditions. I was no naturalist if I chose sitting by the glowing fire instead of going outside to be inside a small blizzard. 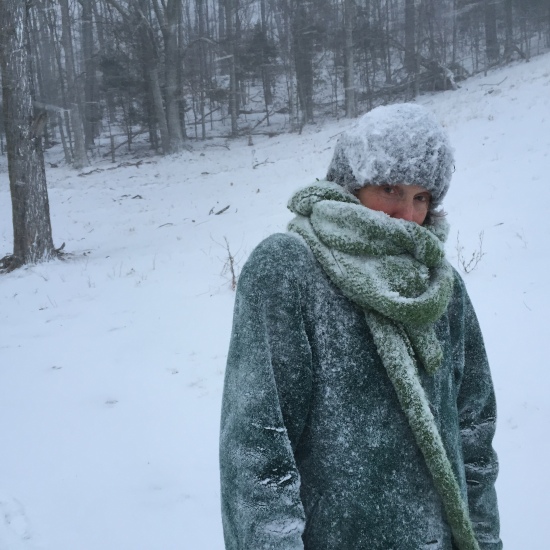 Author poses in blizzard for husband.

It was glorious. I could not see very far in front of my feet, but we walked on known land, around the Pine Tree Hill where the family cemetery awaits me. Yes, the sounds of the blizzard in the forest and the whizzing motions of the thousands of snowflakes stinging my face, ping, ping, ping, hypnotized my thoughts, commanding my attention to just one thing. Being there outside.

Trees polished to pewter by wind and snowflakes.

The next day I found an old paperback in my parents’ library room over the root cellar. There it was, an appropriate choice for the season–Scott’s Last Expedition: The Personal Journals of Captain R. E. Scott, CVO, RN. Found next to his frozen body, the diary is compelling reading even though we know the tragic outcome. One can read it over and over, trying to comprehend the predicament of this small group of men. Scott and his team are very near the South Pole traveling under extreme conditions when they find a black flag and sledge and dog tracks indicating that the Norwegians had made it there first. They had lost “priority.” Scott writes, “Many thoughts and much discussion have we had. To-morrow we must march on to the Pole and then hasten home with all the speed we can compass. All the day dreams must go….”

Published by Tandem Books, in the Great Ventures Series.

“All the day dreams must go….” The poignancy of this comment haunts me. But they must walk on, though emaciated and frostbitten. They do leave their mark at the North Pole proper, but then turn around in the worst blizzard they have yet encountered to head to the closest storage depot. They die just 11 miles away. But in what manner should they compose themselves for the end?

Scott makes a number of entries about his subordinate Titus Oates:

Should this be found I want these facts recorded. Oates’ last thoughts were of his Mother, but immediately before he took pride in thinking that his regiment would be pleased with the bold way in which he met his death. We can testify to his bravery. He has borne intense suffering for weeks without complaint, and to the very last was able and willing to talk about outside subjects. He did not—would not—give up hope till the very end. He was a brave soul. This was the end. He slept through the night before last, hoping not to wake; but he woke in the morning—yesterday. It was blowing a blizzard. He said, ‘I am just going outside and may be some time.’ He went out into the blizzard and we have not seen him since.

Scott himself at the time of writing has one foot so badly frostbitten that he knows it will have to be amputated should he live. The temperatures are -40 degrees F day after day. On March 22/23 he writes:

Blizzard as bad as ever–Wilson and Bowers unable to start–to-morrow last chance–no fuel and only one or two of food left–must be near the end. Have decided it shall be natural–we shall march for the depot with or without our effects and die in our tracks.

The reader hopes this is the end of the text and a merciful ending to their lives. But there is one more entry on March 29th. The last line of the diary is “It seems a pity, but I do not think I can write more.”  Roland Huntford in his book The Last Place on Earth gives an account of the interval between March 22/23 and March 29. Scott and his two remaining subordinates, too debilitated to move,  stayed in the tent in their sleeping bags writing letters to loved ones, documents that have become the subject of scrutiny by historians. Scott’s reputation as heroic explorer has been the subject of controversy.

Modern Library Edition of Roland Huntford’s account of the race to the South Pole: Britain’s Robert Scott vs. Norway’s Roald Amundsen. His critique has been challenged by subsequent historians. The photo of Castle Rock on the book cover was taken on 17 September 1911.

Huntford critiques Scott as inept, but recent evidence indicates that Scott faced harsher than usual weather and one of his orders that could have saved him was never carried out. Despite getting to the South Pole first, Amundsen lost the battle for renown, in part, Huntford says, because Scott was the better writer.

My blizzard was small. I was not at the North or South Pole, suffering the Homeric conditions that plagued the famous Arctic and Antarctic explorers, who fought their way to the poles for nation and glory. I knew exactly where I was, and it was not far from a fire, so I was no heroine. My reward was exhilaration, not renown, as I went outside to feel the weather, rather than look at it from the inside. The naturalist has a different temperament than the polar explorer, happily from my point of view, but the polar explorers have left us with diaries that exemplify heroic aspects of human beings, inept or not, under duress in the great outdoors.

I am back in Ithaca, the tufted titmouse still singing in the apple tree  at 1º F.

Tufted titmouse slightly up from center in the apple tree. Profile view.

Today I decided to stand at the window observing. I stood and the tufted titmouse sat, silent for once. This went on for quite a while. Sometimes the branches of the apple tree distracted me. That’s when I noticed the second tufted titmouse. There she/he was, higher up in the tree. So, silence because mission accomplished? The mate has acquiesced? I don’t know, but I will be looking into the habits and psychology of this hardy little bird. 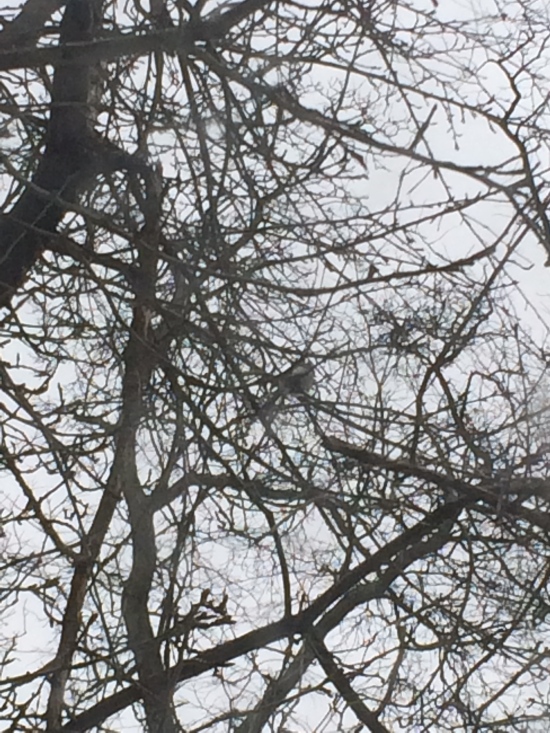 The second tufted titmouse almost dead center in the photo.

So, have I rambled? What do the tufted titmouse and the blizzard have in common? As John Muir said “When we try to pick out anything by itself, we find it hitched to everything else in the Universe.”