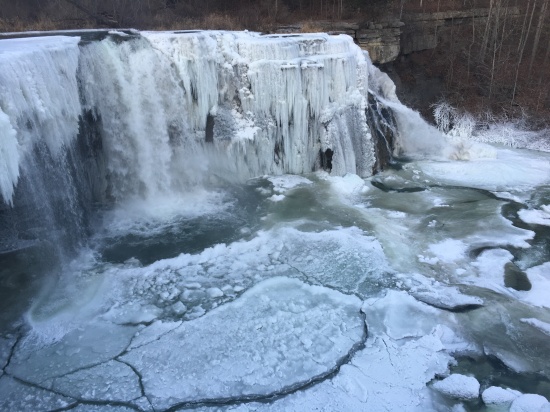 We, two grandmothers, two mothers, and two toddlers, were walking in the snowy playground overlooking Ludlowville Falls on Salmon Creek in Lansing, NY last week. The falls had thawed from their frozen state of January (shown above) and spumed forth vigorously. The snow was crusty and the sun bright. As we moved closer to the edge of the overlook, we noticed tiny bugs dispersed evenly over the surface of the snow. It was hard not to step on them. Although minute, their dark grey-brown bodies were starkly visible against the snow.  They moved slightly. We were all intrigued, even the one-and-a-half year olds, and we wondered how they could stay “warm” on the snow.

I thought to myself that they looked familiar.  One of the stranger insects that I studied in Entomology at Cornell was the stonefly, a member of a genus called the Plecoptera. It is one of those aquatic insects, like the mayfly, that devotes its entire terrestrial existence to mating, barely or never eating. The last stonefly that I encountered was a rather large one that crashed a party of ladies drinking wine near a stream.  We decided that it was a “stoned” stonefly. Rarely flying even though they have prominent transparent wings,  they have a still and somber presence. The name derives from the Greek, meaning “braided wings.” They are sometimes called “snowflies.” 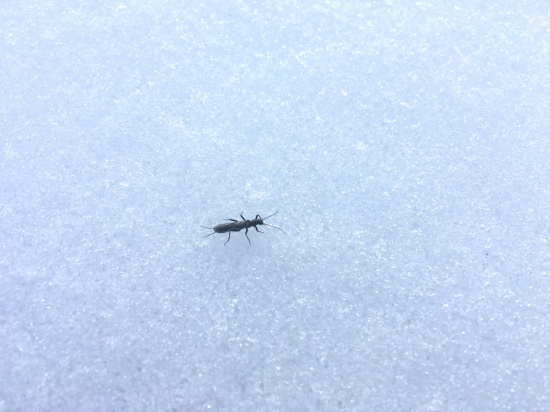 I went home and googled “minute stoneflies in winter.” The first entry titled “Winter stoneflies sure are supercool” confirmed identification and answered questions about their lifestyle. Posted February 24, 2011, on the Scientific American website by Guest Blogger Holly Menninger, it describes the author’s visit to Taughannock Falls in Ithaca, NY, just a few miles from Ludlowville Falls, where she also encounters tiny stoneflies on snowy ground. She explains that winter stoneflies combine several strategies for avoiding internal freezing–through the phenomenon of supercooling and production of antifreeze compounds. Very small volumes of water, like a raindrop or cells in a stonefly, will remain liquid well below zero. The addition of antifreeze compounds in intercellular spaces prevents ice crystals forming and breaking into cells. Further, Menninger writes that “by walking about on the tips of their feet, the adult stoneflies avoid the hazards of external ice crystals potentially invading their bodies and inducing inoculative freezing.”

The presence of stoneflies is a good sign. Aquatic insects such as the stonefly have two life stages–the aquatic nymph, which may last for several years, and the terrestrial adult, which is very brief. Nymphs live in streams and require well-oxygenated water. Pollutants are known to deplete oxygen levels. So, the presence of the adults on snow indicates that nymphs prospered in pollution-free conditions. We marvel at the adults out so early in February, but how the nymphs survive in Salmon Creek near the frozen falls is even more astonishing. They find small pools of water insulated by ice. It all seems precarious. Thus, adults have just one goal–to mate. Females of some stonefly species can produce up to 1,000 eggs each. Winter stoneflies belong to the Capniidae family, which includes about 300 species.

I have been wanting to say a few complimentary things about winter. The stoneflies’ hardiness pushed me to take pen in hand. I profit from winter’s quietness, its testing of my own cold hardiness, and its artistry. Obliterating color and brush stroking every form, snowfalls  highlight architectural elements of garden plants and trees. Caps appear on the buds of the star magnolia. I see twigs that I have never noticed before. I see the structure of the long, feathery red spruce branches. Even an old rusty garden urn takes on an enhanced appearance and reveals visitors.

And a winter walk in the forest presents a minimalist landscape, a retreat from overstimulation. 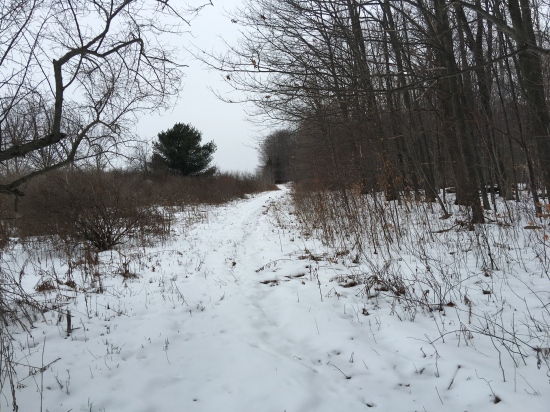 About 10 days ago a huge flock of robins appeared in our neighborhood. They were animated, dashing back and forth from the sycamore to the tulip tree to the walnut to the honey locusts, never settling, chattering like magpies! A cheerful commotion for sure. That night it snowed, about 3-4 inches of light, crystalline flakes. There was artwork everywhere the next day. The robins, who had roosted overnight, seemed undaunted in the morning. Just as much chatter and commotion but they left by mid-afternoon. In Highland County the first snow after robins return is a called a robin snow. The implication of the folklore surrounding the name is that the robins bring the snow. There are several named snows in Appalachia. I experienced a robin snow on the way to Vinegar Hollow once. We had stopped at Seneca Rocks in West Virginia and became engulfed in a snowfall that was full of robins, hundreds of them. It was an exhilarating sight, one that could not be photographed. The grey wings of the robins appeared and disappeared, shuttling through the slanting snowfall at great speed.

Today, February 22, it’s 61 degrees F. Winter is elsewhere, but it will return, and I will keep looking for good signs.