Display near the entrance to the Children’s Garden of the Brooklyn Botanic Garden.

Exhibit item in the Steinhardt Conservatory at BBG. 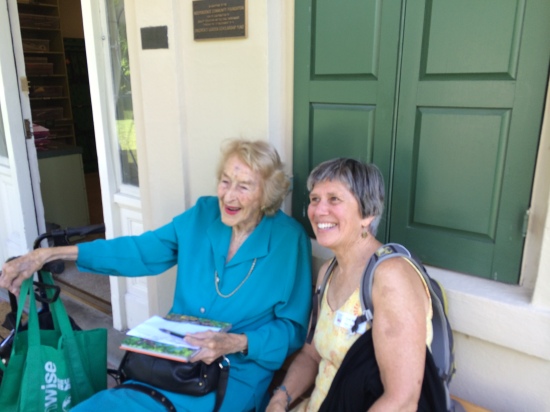 I came to BBG as a “botanical instructor” just as Frances Miner was retiring. The motto she stressed was “learn by doing.” This statement has rung true to me many times over the years. Too often we feel “stupid” because we can’t replicate a procedure or activity after hearing an explanation. But we are not “stupid,” we just have not learned through the body. The Director of BBG at the time, Elizabeth Scholtz (shown above) still goes to work at the garden, as Director Emeritus, Monday through Friday. Her devotion, charm, and horticultural advocacy are legendary. Ruth Harzula (also shown above), who was the first woman to graduate from Delaware Valley College with a degree in Ornamental Horticulture,  was in my cohort of young “botanical instructors” who worked at the garden in the 1970s. She brought many talents to our group, among them working with special needs children in the vegetable garden. I also remember the day she unleashed a natural history drama at lunch. Bringing forth her insect collection for show and tell, she screamed upon opening it.  There were lots of little “bodies” moving around.  A praying mantis egg case had hatched and a swarm of tiny praying mantises, each the length of a finger nail at most, was busy devouring her carefully pinned insects. It was a terrifying scene of carnage, wings and legs strewn about half eaten.  At least this is how I remember it. Ruth, please let me know if I have misrepresented the event.

Tools in the Children’s Garden house.

In my era we taught a sequence of four classes for New York City public school children in which they learned how to make cuttings, how to pot up their rooted cutting,  and had tours of the conservatory and the outdoor plant collections. I remember the students as being very interested and well behaved. They loved the hands-on work in the greenhouse. We taught adult classes as well. While most classes had a practical application, like dyeing fibers with plant materials, I taught a “romantic” one, “Trailing the Wild Arbutus with Gun and Camera,” about the world’s great plant explorers and the plants they introduced to our gardens. These plant-loving explorers underwent extraordinary deprivations and dangerous situations to make these flowery “introductions.”

Staff in the Children’s Garden offer lemon balm cuttings for potting up at the celebration. Lemon balm is tough and lovely. The cutting I potted up survived several subway rides and a long bus ride to arrive safely in Ithaca, NY.

I was also in charge of the Shakespeare Garden, but at that time there was insufficient funding for buying special varieties or even spending many hours in the garden. Luckily it looked perfectly beautiful, to me, with too many foxgloves. 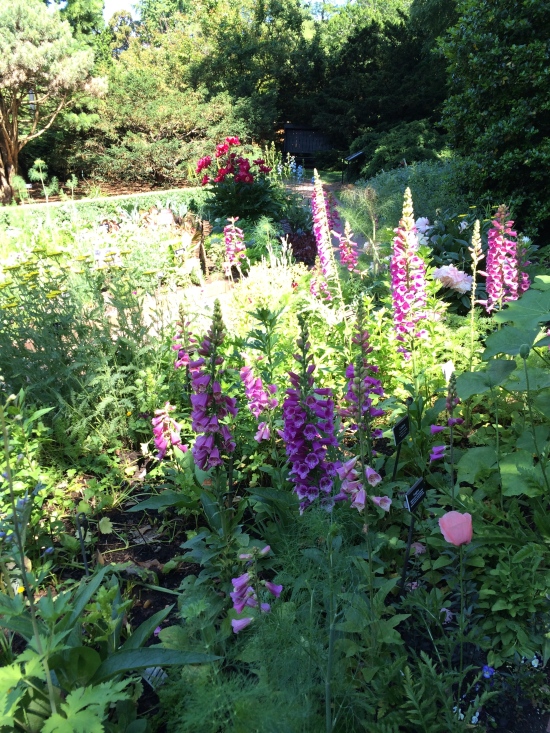 There are still lots of foxgloves in the Shakespeare Garden.

Scotch thistle in the Shakespeare Garden.

There were people as interesting as the plants. One was George Kalmbacher, a retired postal worker, who became an expert in bromeliads (pineapples and their relatives), traveling all over the world to visit and document rare species. Like our very own phantom of the opera, he could be found at all hours of the day and night scurrying between the herbarium and the conservatory with a huge camera and a plant in his hand that he was photographing, probably for the book What Flower is That? It had over 1000 photographs of garden flowers. His knowledge was encyclopedic–because he certainly learned by doing. One winter he got quite excited because the night-blooming cereus (a kind of cactus) was getting ready to flower and he  urged us to be in the conservatory between 10 pm and 11 pm for the grand opening. I fretted about staying so late in the city, but he said that this would be my only chance to watch the huge buds open, petal by petal, and he was right. Some call it the Queen of the Night, and have paid tribute with musical accompaniment. By morning the Queen has wilted, her gown in disarray, the petals hanging limp.

Keyhole tree near the Steinhardt Conservatory at BBG.

And then there was Frank Okamura who curated an outstanding collection of bonsai. He was a little intimidating, not loquacious like George, stern in protecting his tiny trees. Although not a fan of bonsai, when I stood before one of his two-foot-high, 100-year-old oak trees in full flower, I felt the miracle of being able to physically and mentally encompass the entirety of the oak.  You can shrink a tree, but not its flowers. The oak tassels (the name for their flowers) were their normal size, dangling like hugely oversize but still elegant ear-rings on the diminutive trees, an incongruous, arresting sight.  Some people don’t realize that trees flower, so a bonsai seen through the seasons can be instructive. Like Mr. Kalmbacher, Mr. Okamura was self-trained.  The obituary in the New York Times written by Stuart Lavietes describes how, interned in California in WWII, Mr. Okamura came to the garden to work in its neglected Japanese garden, but also waited tables and set pins in bowling alleys.  Mr. Okamura’s daughter said that he “virtually dangled off precipices in the Catskills to get saplings he thought would make good bonsai trees.”

I first started as a botanical instructor in Fall ’73 or early ’74, fresh from a year as a horticultural work-study student at Kew Gardens. The salary was $6000 a year so I commuted one and a half hours from home each way. Leaving a trail of corn muffin crumbs from my favorite deli in Grand Central, I carried hazelenut coffee, a book, and my earth shoes. It was in Grand Central that I bought a copy of One Hundred Years of Solitude by Gabriel Garcia Marquez.  The opening lines transported me:

Many years later, as he faced the firing squad, Colonel Aureliano Buendia was to remember that distant afternoon when his father took him to discover ice.

Upon reading that sentence I was deeply in love with a book. An untidy passenger, I sat on the subway reading and spilling coffee but never scalded anyone but myself. Back then Grand Central was not the upscale place it is now. I remember a homeless woman in a tattered nightgown barely covered by a dirty raincoat standing on the top of the steps leading down to the Lexington Avenue line, urinating and shouting obscenities. The stream of well-dressed commuters heading to Wall Street parted in front of her and united beyond her seemingly without notice. Buffeted by the noise and the soot, I rose out of the subway as bedraggled as the Queen of the Night after flowering and entered the Brooklyn Botanic Garden through a turnstile leading to the Cherry Esplanade. Calm, green, symmetrical allees of flowering cherry trees lined a central area, a place to breathe deeply, a sanctuary. I learned then and know so much more now how much work it takes to maintain a sanctuary. In the obituary mentioned above, Stuart Lavietes writes that

I would like to think that people, children and adults, do learn these qualities in working with plants, all plants, from liverworts to radishes to roses. I will let Ted Maclin, former coordinator of the Children’s Garden at the Brooklyn Botanic Garden speak here:

Statement from Ted Maclin, displayed in the exhibit at the Steinhardt Conservatory commemorating the 100th anniversary of the Children’s Garden at the Brooklyn Botanic Garden.

So, I learned from plants and people in my days at the Brooklyn Botanic Garden. It was poignant on June 7th to greet people that I have not seen in 40 years. The good news is that their smiles are as youthful and their eyes as bright as when I first knew them. We were happy to be together again in the garden.