I have brought rain to Vinegar Hollow in Mustoe, Highland County, Virginia, it seems. For the last two months in Ithaca, NY, we have had almost daily deluges, rains that you can’t see through. I arrived Thursday evening, July 27th, 2017, with drizzle, and it  continued through Saturday morning, amounting to more than a half an inch. I came with Belle the dog and Rex the cat for a writing retreat, to complete crunch-time revisions on my primrose book for Reaktion’s Botanical Series. 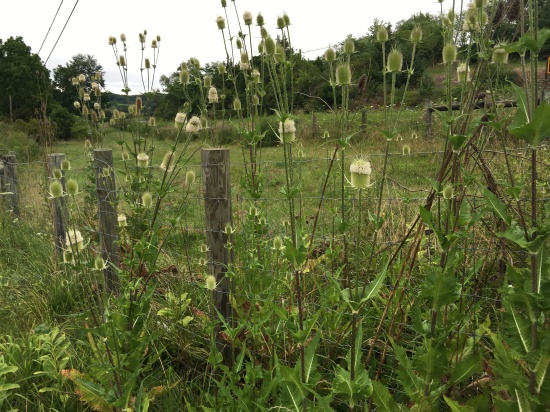 Technological difficulties soon plagued me. The internet wouldn’t work. A swift intervention by HTC (Highland Telephone Cooperative) gave me a new modem by early afternoon Friday. But then suddenly my cell phone refused to charge. 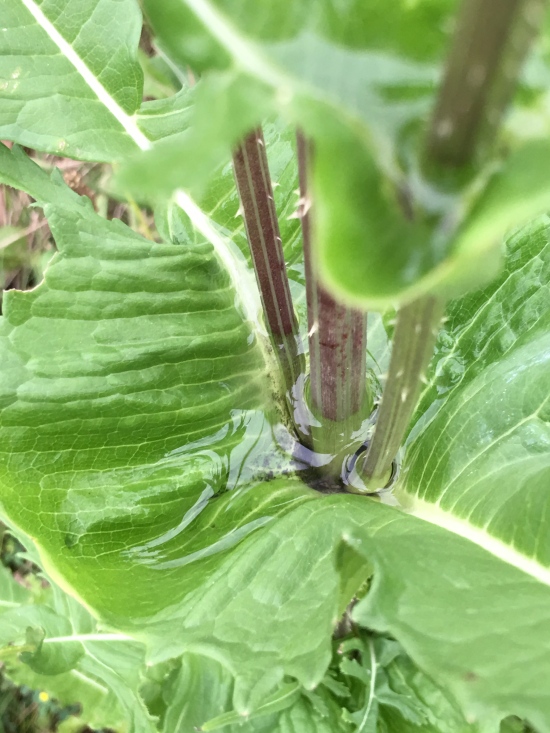 Teasels are “cup” plants, in that the bases of the leaves are perfoliate, encircling  the stem. The “cup”is said to serve a carnivorous function like that of the pitcher plant (insects fall into the water, drown, and their nitrogenous compounds are absorbed by the plant).

I hate leaving the hollow once I arrive, but Saturday morning I drove two hours to IphoneRepair in Harrisonburg. The gps took me a new way to Harrisonburg. I turned right off 220 North onto Moyers Gap Road (Route 25) just before Franklin. It went over hill and dale, through twisty valleys and tucked away homesteads, places seldom seen I thought. An indigo bunting flew down to the side of the road on one curve where I had pulled over to investigate a rampant white morning glory that had magenta stripes radiating from the center of the flower. Its coloring was the opposite of flowers of the wild field bindweed (Convolvulus arvensis, one of whose common names is “Devil’s guts”). It could have been a garden escape; unfortunately I could not photograph it.

I thought at first the gps had a sympathetic sense and didn’t want to subject me to steepness and curves, but it did finally send me over Shenandoah Mountain, which was wrapped in heavy fog and drizzle. It was hard to believe I would find an IphoneRepair shop at the end of this mysterious journey. When I neared Sugar Grove, site of a strange NSA compound,  I found flat bottomland where both sides of the road were flanked with white teasel, tall, abundant, and lovely, almost like armed guards. There had been no teasel on the mountain.

Teasel is a valuable alien species whose spiny flower heads have long been used in carding, a term that can be used to mean aligning raw fibers or raising the nap on woolen fabric, a form of carding.   Teasel heads seem to have been used for both purposes from Medieval days to the present. I remember seeing a few years ago an ad showing a Scandanavian carding machine, which consisted of row upon row of teasel heads on a vertical frame. This teasel card is a replica of one used at La Purisima Mission near Lompoc, California founded in 1787. Franciscan missionaries thought the Native Americans, Pueblos, underdressed and set up carding quotas to supply straightened sheep fibers for making woolen cloth. In Scotland up to 3000 teasel heads were used in gigs to raise the nap in velvet. The website Grow Wild: Flowers for the People has a blog by Claire Bennet, Scotland Partnership Manager and owner of Hook and Teasel, about teasel and carding, where if you scroll down, you will find a photograph showing a teasel carder used at the Knockando Wool Mill, in Speyside Scotland.

In Harrisonburg the nice young man at iPhone Repair identified with some dismay a hefty bug and other debris in my cell phone charger port. (I don’t think it was a bug, but rather a portion of a locust rail with lichen where I rested my cell phone to photograph some land snails.)

When I returned to Highland County, in Virginia, I noticed that there was no white teasel to be seen along the roadsides, only the lavender teasel, Dipsacus sylvestris. There must be a reason for this sudden change in distribution pattern. D. sylvestris is apparently the main species used for carding; the Latin name is a synonym for D. follonum.

Lavender teasel (Dipsacus sylvestris) near the livestock market between Monterey and Mustoe, Virginia.

Lavender teasel, also a striking, martial-esque plant, well-defended with spiny projections surrounding the flowering head and elsewhere, though not quite as tall or robust as the white teasel, attracts plentiful butterflies, bees, and beetles.

At least four insects (notice the three beetles on the lower edge) are working this teasel.

Once back in the hollow on Saturday night, I found the sun. Butterflies and goldfinches were still visiting the thistles at 7:00 pm, glad that the prolonged drenching was over. It was blanket weather for sleeping.

Teasel in Highland County, VA, near the Jackson River and Lamb Hollow Road.

I woke up to a Sunday morning in the 50s, bright sun, and no technological problems. The writerly problems of revision remained, however. Some of these problems can be technically difficult, like styling endnotes!