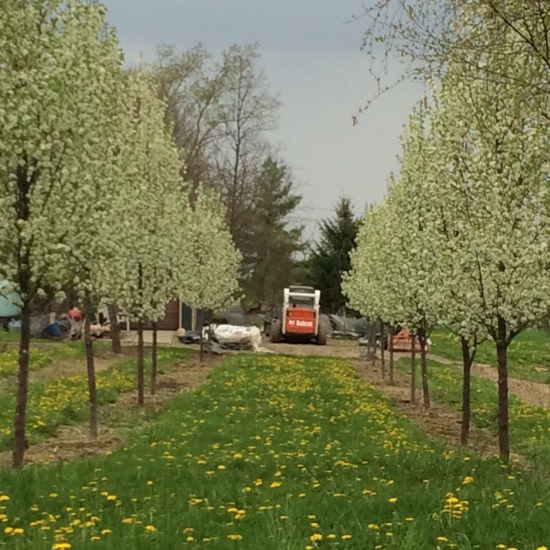 Bobcat at the end of a double row of flowering pear trees at Cayuga Landscape tree nursery in late afternoon of overcast spring day in mid-May.

May 12, 2014. Late afternoon. I am off to my husband’s tree nursery to walk the dogs. I have two now, Daisy the golden and Belle the Belgian shepherd.  Daisy, Jack’s dog, comes occasionally for a week of  camp with grandma. There is abundant visual interest in the late afternoon under a brooding spring sky that spits raindrops but not too seriously. The dandelions, the pear trees, and the green grass. That is enough to marvel at after such a long winter plagued by polar vortexes. I have walked here for years and I watch the trees grow and am sad when they depart. I walk desultorily (I constantly remind my husband that my country walks are not  fitness hikes), looking at what’s going on–the leafing out and the sprouting and the spreading and the bubbling of algae in the two little marshy ponds. I absorb the energy of exuberant growth.

I walk around the end of field 2 with its rows of young conifers and boxwoods, enjoying the swoosh of the tails as the doggies go in and out of the hedgerows sniffing and peeing. They are happy to be off leash in the country and that makes me happy too. I come to the end of field 2, which has a huge compost pile, a great site for giant teasel and monster mustard weeds in the summer and late fall, and a fenced enclosure for growing specialty trees and shrubs. It is not appealing to see anything fenced in, but there is so much loss to deer browsing already in the nursery that my husband reluctantly decided to fence in a small area.

I walk near the fence line of the enclosure. I see bare earth and something more.

Zoomed in image of the one above.

I stopped, thrilled to see an old  friend, the common liverwort (Marchantia polymorpha). Years ago as a graduate student in the Botany Department at the University of Texas at Austin I spent hours looking at slides of every aspect of the life cycle of this primitive, nonflowering plant under the tutelage of the great botanist Professor Harold C. Bold. He was a stickler for life cycles, and this plant has several ways of reproducing itself.

A view of the female umbrellas of the common liverwort.

Zoom-in view of photo above.

View of gemmae cups, which are a means of asexual reproduction. Sometimes called splash cups, the they hold little balls of tissue that splash out in the rain, spreading the plant vegetatively rather than sexually. (I apologize for the focus, but I find it hard to hold my iPhone steady while on my hands and knees with the dogs breathing down my neck, intensely interested in what I am doing.

I walk on, finding a patch with male and female reproductive structures near each other, which means that sperm may easily swim from the underside of their “umbrellas” to the underside of the female “umbrellas,” where sexual union may take place if circumstances (like water) are conducive. Liverwort “love” results in a very little plant, the sporophyte, which only lives on the underside of the female umbrella for a short time, producing spores. There are further explanations about “life cycle” and “alternation of generations” and “haploid vs. diploid” that I could delve into but will dash on instead to basic liverwort stuff.

The “body” of a liverwort is called a thallus, and is considered primitive because there is nothing much to it at first glance, or second glance, or third glance. A thallus looks like the underside of a very skinny old green bathtub mat, the kind that has suction cups.  Or maybe I should just say that spreading thalli look like pond scum that has found its way to land, which is probably what happened millions of years ago. They do not stand. There is no water-conducting or structural tissue in the thallus. Only the reproductive structures lift themselves from the horizontal. There are so many wondrous aspects of liverwort biology that I could go on about, but I know that blogs are better short than long. I went home and dug up some of my liverwort literature. There is the grand three-volume The Hepaticae and Anthocerotae of North America by Rudolf M. Schuster.

The classic three-volume The Hepaticae and Anthocerotae of North America by Rudolf M. Schuster. 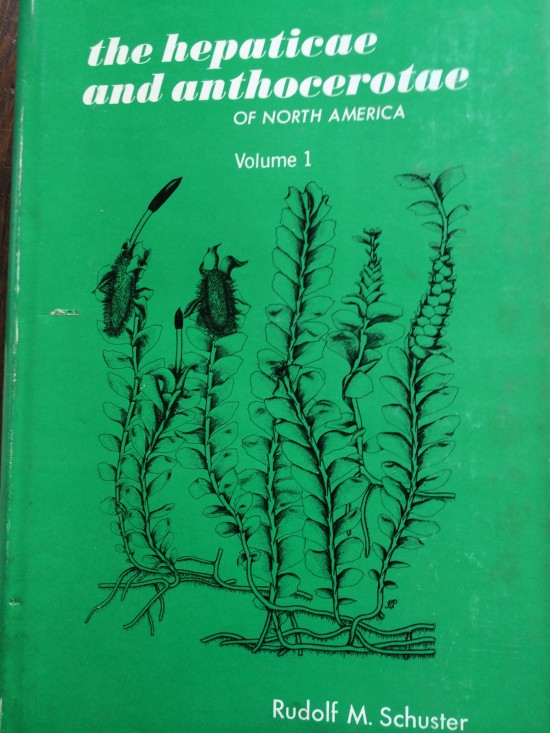 I have photographed the covers because these are Schuster’s own illustrations (the Foreward notes that he drew 98% of the illustrations in the three volumes) to give a sense of the beauty of these minute plants. In the Preface Schuster writes that he traveled 175,000 miles over the 20 years of his research. His travels took him from Key West, Florida to Ellesmere Island, part of the Qikiqtaaluk Region of Nunavut, a Canadian territory–“within 80 miles of the northernmost edge of land.”  He wanted to see each species as a “living, dynamic entity.” I, a native of the Appalachian mountains, take particular interest in his comment that there is a high degree of endemism in the southern Appalachians. His wife Olga typed and retyped his manuscript and critiqued his work. Professor Schuster  includes an epigraph for the book on a page directly  after the title page:

Quote used in prefatory material to Volume I. 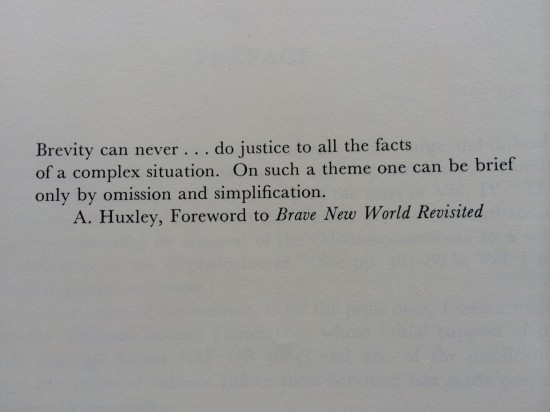 Quote in the prefatory material to Volume III.

Schuster’s three volumes are a work of art and, as the epigraph above suggests, one good reason for lack of brevity is a textual appreciation for the diversity of flora and fauna found on planet Earth. I have learned that Professor Schuster only recently died, at 91, after a lifetime as a professor, world explorer, bryologist (one who studies mosses), botanist, and writer. Early in his career he studied at Cornell University, which is where I completed my graduate studies in botany, and not very far from where I am writing this blog. The scope of Professor Schuster’s three-volume work is daunting. For the beginner hepaticologist I recommend Non-flowering Plants, a  Golden Nature Guide. This is a wonderful series and I often go to one of their guides to get my bearings in some aspect of the natural world–minerals, spiders, seashells, fossils, ….

In defense of little plants, like the mosses and liverworts grouped in the plant family known as the liverworts, the eminentVictorian botanist and plant explorer Richard Spruce, who spent many years collecting, among other plants, the very beautiful leafy liverworts of South America, wrote:

The Hepaticae are by no means a ‘little family.’ They are so abundant and beautiful in the tropics, and in the Southern Hemisphere generally that I think no botanist could resist the temptation to gather them. In equatorial plains, one set creeps over the living leaves of bushes and ferns….In the Andes, they sometimes hang from the branches of trees in masses that you could embrace with your arms….I like to look on plants as sentient beings, which live and enjoy their lives–which beautify  the earth during life….When they are beaten to a pulp or powder in the apothecary’s mortar, they lose most of their interest for me. It is true that the Hepaticae have hardly as yet yielded any substance to man capable of stupefying him or of forcing his stomach to empty its contents, nor are they good for food;  but if man cannot torture them to his uses or abuses, …they are, at the least, useful to, and beautiful in themselves–surely the primary motive for every individual existence.” (epigraph to Schuster’s Introduction of Volume I)

I take to heart what Spruce says about the primary motive for existence–to be useful, and beautiful, to oneself at least. Motivated by his love of mosses and liverworts, Spruce explored, at great expense to his health, and in doing so found bitter bark quinine and introduced it to Europe. Liverworts are useful as well as beautiful. They are known to colonize burned areas, their thalli flattened on the soil like bandaids. Indeed, my husband said that he used RoundUp (it is a commercial nursery) along the fence line of the enclosure, so it should be no surprise to find liverworts there.

Seeing the liverworts reminded me of my days as a young botany student, when I thought I could learn everything about all the species in the plant kingdom (and other kingdoms) and be the richer for it–richer in appreciation for the “endless forms most beautiful” (Darwin) that grow around us.”Studying little things”–I did a great deal of that for a number of years, peering into various kinds of microscopes in the laboratory and on my hands and knees in the field. I am the richer for it, or I would not have noticed, and respected so greatly, what was going on in the mud along the fence line of the enclosure at the tree nursery.

P. S. If anyone does want to know more about the life cycle of the common liverwort, please let me know! And here is my homage to Professor Harold C. Bold of the University of Texas at Austin. There is probably no book in my beloved library that I have ever read so closely as his text:

My copy of the Third Edition of Professor Harold C. Bold’s Morphology of Plants.

I underlined almost every sentence, in pencil, as a young graduate student. Unfortunately, the  more “primitive” a plant (I put primitive in quotes because sometimes a seemingly simple organism is actually a reduced version of something that was once more ornate [elegance is often the result of the trimming of the extravagant), the more Dr. Bold expected that we students should be able to visualize and comprehend the significance of every cell in the plant body (the thallus mentioned above). It was a struggle for me then–the elaborate vocabulary (male umbrellas were anteridiophores and female umbrellas were archegoniophores), the strange convolutions of the life cycle.  I, a human being, wandered in a marvelous botanical garden. 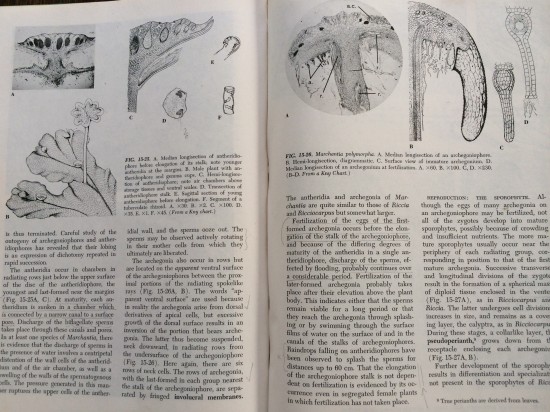 Pages from Bold’s Morhology of Plants, illustrating the cellular anatomy of the common liverwort.