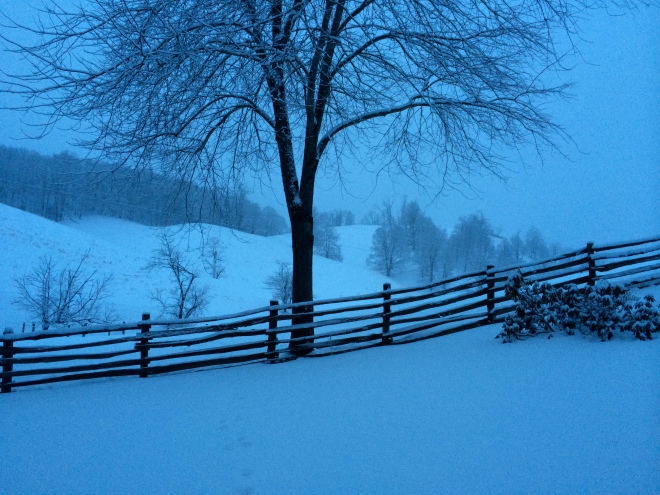 The night before had been snowy.

As the sky lightens in the east, toothpick trees standing like steadfast tin soldiers row upon row take shape, straight and thin. Rosy pink gives way to layers of pale gold and pale gray blue. The scene is still, perfect in its way, but a calf died in the barn in the early morning. 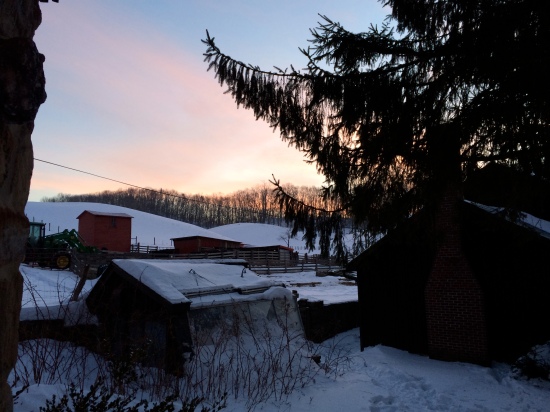 Light appears in the east.

During calving season Mike checks the barn at regular intervals.  He had checked at 3 am, despite his flu, the cold, and the fresh snow that made the road slick into Vinegar Hollow from his house on Route 220. When he came back at 7 am, a calf lay dead on the hay in the stall with its mother.  The death of a calf is both an economic and an emotional loss. 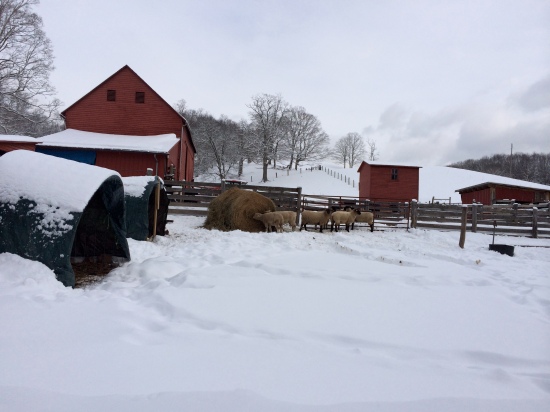 Cow-and-calf shelters to the left,  and yearling sheep near center with straw barn behind.

“I can’t sleep beside them all night,” Mike says, his voice roughened by flu and tiredness. The cow could have stepped on its calf by mistake, or failed to lick the sac off fast enough, or maybe it was born dead, or…. There is no way of knowing what happened in those few hours as the cow and calf enacted this farm tragedy. The cow will feel her loss for some time in the pain of swollen udders. Sometimes there is a solution. It may be able to take on one of a set of twins. 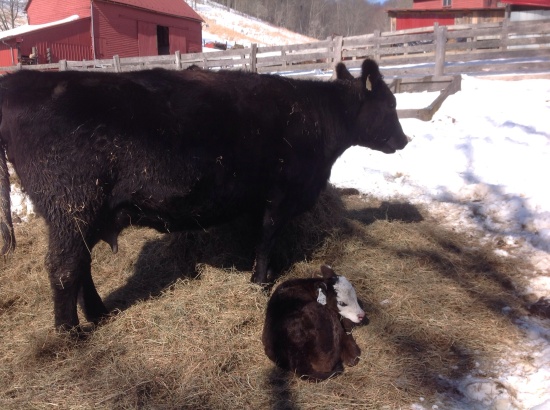 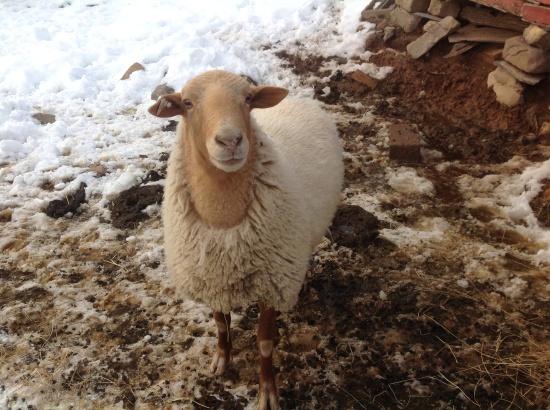 Alert young California Red (has some fat-tailed, red-faced Tunis in his heritage).

A few hours later, two crows appear in the blasted walnut tree in the sinkhole. One crow leaves. One remains. Lovely, simple math. Now there are two again. One flashes away, then the other. Back and forth they go. If they left contrails like planes, it would be quite a tangle in the sky. By midday the juncos are visiting the cows and yearling sheep in the pen by the old house picking up hayseed. They are very busy. The crows take an interest as well.  Two cows and their calves sit soaking up the sun. Occasionally one rises to spray steaming manure or lick the face of her calf, but mostly they sit, face to the sun, soaking up heat, to balance those minus 15-degree nights of the week before. Black crow on white snow. Black Angus on brown hay on white snow. Juncos gray and white. Butterscotch barn cat lolls along in the sled tracks, confident that the dogs are worn out, asleep. 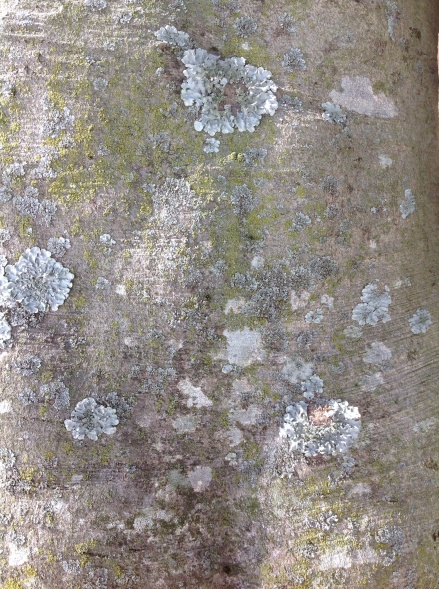 Lichened bark of the copper beech.

Tree trunks in the garden become art objects, their surfaces intricately sculpted.  No doubt much is going on beneath the lichened bark of the beech and the owl eyes of the red spruce as the juncos visit the bare ground at their base. Days like this in late February set in motion the whirring cogs of spring. Snow and ground are melting.  A large bluejay floats from branch to branch of the beech tree. 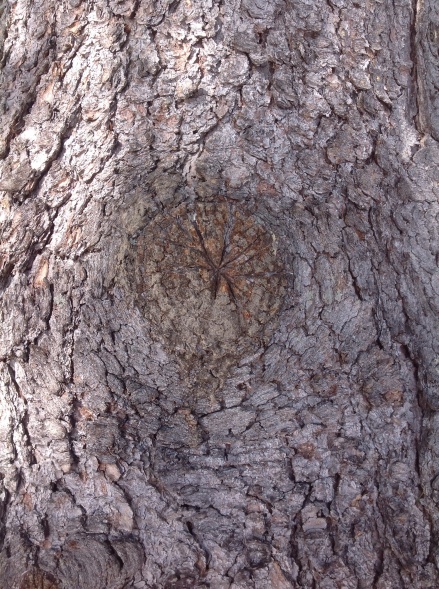 “Owl eye” of the red spruce.

The hollow, like a reflecting pool, shimmers with each movement of the sun and clouds. Mid-afternoon is a time of shine and shadow. 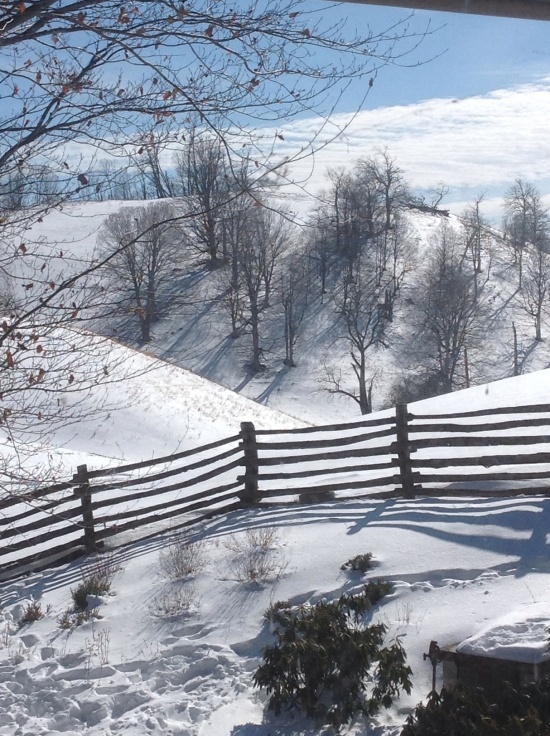 Calves have only a day or two in the barn before they must face the elements to release space for the next cow near birth. The cows and their new calves may take to the shelters Mike has made for them or they will remain embedded in the hay close together. 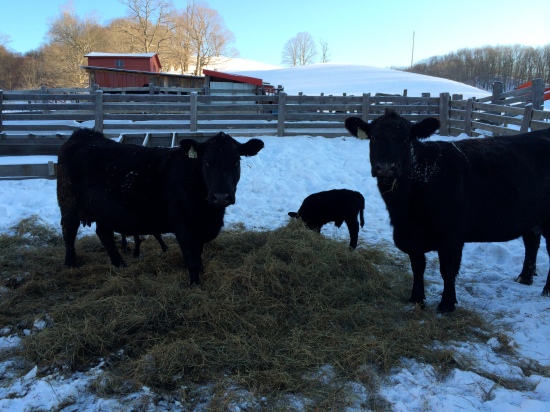 Sky to the north becomes turquoise in later afternoon.

The day begins to fold in for the night. Shadows grow darker and bigger. Juncos take shelter in the overgrown boxwood and yew. 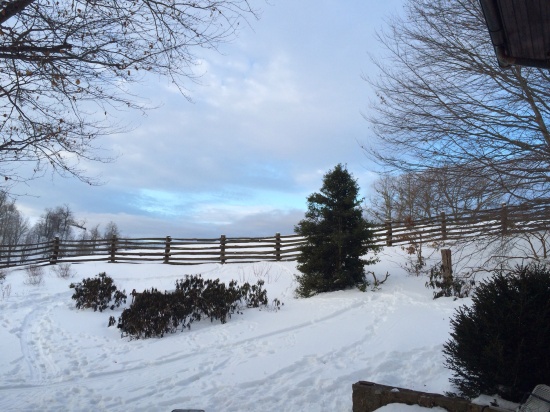 View to the south in later afternoon..

Where the hollow tapers, to the south, the sky colors in hues of apricot, lavender, chocolate. I rush out to catch them but they have gone. It is all happening so fast. Night comes, and it will snow again. 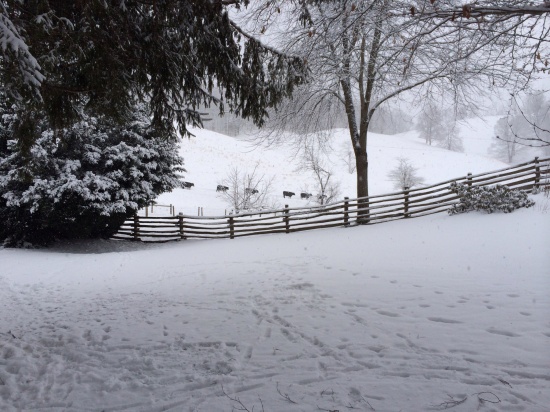 Cows headed away from the barn meadow the next morning.

After a day here, hollowed, I feel as if I have been spinning around the entire world. There are no places I am not part of when I plant my feet in Vinegar Hollow. Oh, little calf that never even experienced a day!